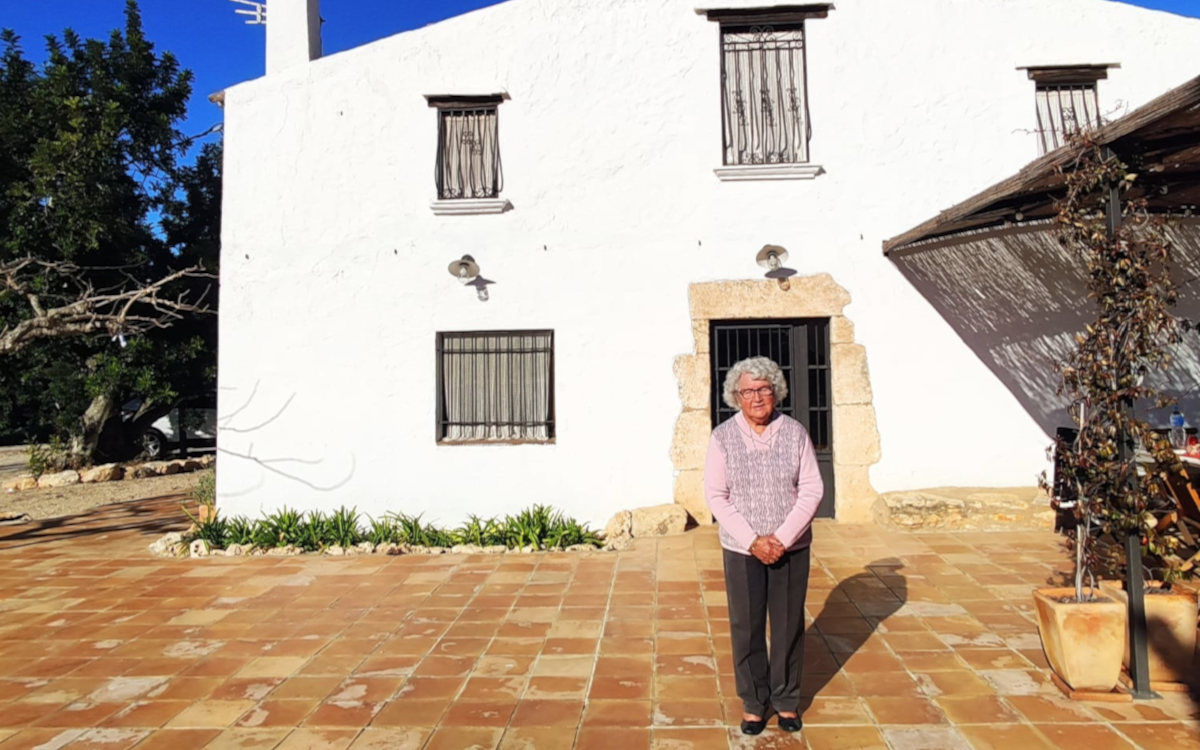 “MUMA goes back in time to remember its past”

MUMA is a farmhouse that dates back to the 18th century and that has changed owners over the years, and many of the experiences have been forgotten between the stone walls and the centenary carob trees that surround the memories of before.

Many times, the names of the farms were linked to the former owner of the farm and so on. We named the rural house as MUMA, but many people know it as Can Corbella because of the former owners, and if we go further, surely, we could discover other names.

The coincidences of life are surprising when in banal conversations, the past is mixed with the present, and memory revives memories. At any meal, our in-laws explain to us that their grandmother, Mrs. Carmen, lived for two years in a farmhouse in El Vendrell during the Spanish Civil War. She was 8 years old, and here begins a story of a family in years of war.

Mrs. Carmen’s father worked as a station chief, and during the Civil War he changed stations with his family as the war progressed. From the town of Garcia (the Ribera de Ebro region), passing through Mora de Ebre, Roda de Berà and up to Sant Vicenç de Calders Station. The stations were not safe places for anyone since they were considered strategic places, and the houses of the same stations, where the railway families slept, were desert points where no one ended up living.

Fear made family members look for alternatives. Mrs. Carmen explained that when they arrived at Sant Vicenç de Calders Station, the station as the main node, it was not a safe place, and without knowing why, she, her mother and grandparents lived in a farmhouse at the same time as his father spent weeks at the Station.

Mrs. Carmen remembered that the farmhouse was isolated in a field of carob and olive trees. He had the description of the house in mind and explained that when you entered there was the kitchen along with the stable, and that to the right there was a room that had a pantry function with a stone oven where they cooked bread. The old farmhouses had these characteristics in common, but the location of the oven made one suspect whether that farmhouse was MUMA or not.

She began to describe a second floor with rooms. A room to the left up the stairs where his grandparents slept, a second room to the left where some parents slept, whose names she can’t remember, a third room in front where no one slept and was kept in case the owners came to sleep, a fourth room where she slept, her mother and two sisters, daughters of the other family, and in the background, she remembered jars of olives. The second coincidence was that the rooms fit very well with today’s reality. At the back of the house, a tool yard. But her memory had no great memories of the outside beyond the olive and carob trees.

Between the oven and the description of the different spaces, the way to find out if that farmhouse was MUMA was for Mrs. Carmen to pay a visit. This Christmas she was able to visit us, and the surprise was very emotional. MUMA was the farmhouse where she and her family lived during two years of the Civil War, between 1937 and 1939.

The memories and experiences surfaced at the time, but it will be in a future article where we will explain the memory of Mrs. Carmen, who, at 93 years old, remembers what she did and how she lived when she was 8 years old in an isolated farmhouse and in the middle of a war.

MUMA is now Rural Tourism, but also a space for memories that we want to rescue from previous times. MUMA CASA RURAL, located in El Vendrell, in the Baix Penedès region, and only 35 km from Tarragona and 55 km from Barcelona, ​​is the ideal Holiday Cottage to disconnect, rest and enjoy with family, friends and with our pets. at any time of the year, but also to discover the history of the past.

Mrs. Carmen’s memory of MUMA will not be forgotten, and with these articles we want to preserve her memory and that of MUMA. Thank you, Carmen!